I just heard about Direct3D 11.1 and would like to share some of the new features.
Some of the major improvements:
Posted by Seth Hoffert at 8:21 PM No comments:

Now that I have explained a bit about tessellation, it's time for an actual example. We'll start off with a basic cubic Bézier spline renderer.

Let's start by looking at the parametric function used to compute a cubic Bézier curve. The control points are represented by P0, P1, P2 and P3.

Recall that the vertex shader is run once per control point. For this example, we just pass the control points through to the next stage.

Note that up until now, we have not used the cubic Bézier curve parametric function. The domain shader is where we use this function to compute the final position of the tessellated vertices.
Because this is an example, I omitted optimizations to maintain clarity.

This is a simple pixel shader that produces black lines.

Control points are treated the same way as vertices.

Now that the shaders are out of the way, it is a good time to explain the purpose of two tessellation factors for isolines rather than just one. Recall that a single tessellation factor can be no greater than 64. When dealing with isolines, this number is rather small; it is desirable to render a single isoline patch with a high degree of tessellation. To alleviate this problem, D3D11 allows us to specify two isoline tessellation factors: a detail factor and a density factor.

Back to the example at hand: let's run some control points through this shader and see what we end up with. 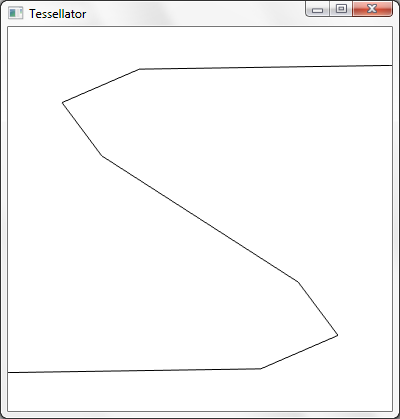 Keep in mind that we're using a hard-coded density tessellation factor of 8 here, which is why the result looks low-resolution. Let's up the factor to 64 and see what we get. 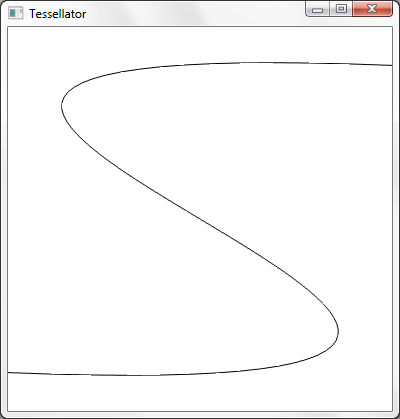 There are a number of things we could do to improve upon this example. For example, to obtain more than 64 divisions per patch, we can use the detail factor to "instance" the line up to 64 times, and piece together the instanced, divided lines in the domain shader. Another thing we could do is create a geometry shader which transforms lines into triangles. We could procedurally perturb the control points in the vertex shader for animation effects. We could compute the tessellation factors as a function of the control points.
Posted by Hexadecimal at 11:01 PM 2 comments:

You might be wondering how the geometry shader interacts with the new shader stages and the new patch primitive types.

Had the tessellator been configured to deal with isolines, then we would be using line DOMAIN_SHADER_OUTPUT input[2] instead.

So, there you have it. The geometry shader integrates seamlessly into the tessellation model. Recall that the domain shader runs per tessellated vertex, and so we have little control over each individual triangle in that stage. A geometry shader can be used to break a patch up into individual primitives, which can be independently transformed, culled, duplicated, etc. Not to mention that geometry shaders can be instanced now... that's for a future post. :)

Excited yet? You should be! What this essentially means is that you can make up your own primitive types (with anywhere from 1 point to 32 points) that the geometry shader can operate on. Wish you had a quad primitive type? Use a 4-point patch with a geometry shader and emit two triangles!
Posted by Hexadecimal at 10:33 PM 3 comments:

Consider the typical flow of data through the programmable pipeline:

Say, however, that we wish to process control points and patches instead. The vertex shader by itself isn't particularly well-suited for handling the manipulation of patches; we could store the control points in a buffer and index with SV_VertexID, but this is not very efficient especially when dealing with 16+ control points per patch.

Normally, the input assembler can be configured to handle points, lines, line strips, triangles and triangle strips. It turns out that it is quite elegant to add new primitive types for patches. D3D11 adds 32 new primitive types: each represents a patch with a different number of control points. That is, it's possible to describe a patch with anywhere from 1 to 32 control points.

For the purpose of this example, say we've configured the input assembler to handle patches with 16 control points, and also that we're only rendering one patch. We will use a triangular patch domain.

The topologies produced by the tessellator vary depending on how it is setup. For this example, using a triangular domain means that the tessellator will produce a tessellated triangle topology described by 3D barycentric coordinates. How cool is that?

You're probably wishing we could transform the tessellated mesh in arbitrary ways, and, well... we can! The next stop is the domain shader. The domain shader can be thought of as a post-tessellation vertex shader; it is run once per tessellated vertex. It is handed all of our output control points, our patch constant data, as well as a special system value which describes the barycentric coordinate of the tessellated vertex we're operating on. Barycentric coordinates are very handy when working in triangular domains, since they allow us to interpolate data quite easily over the triangle.

I have left the geometry shader out of this explanation to simplify things, but it is very possible to throw a geometry shader into the mix to do some very interesting things -- one example that comes to mind is eliminating portions of a patch, or breaking it up into individual triangles to form new topologies. It is also possible to use stream-out with tessellation.

Due to the general nature of the pipeline, we can even use tessellation without binding any actual control point data to the pipeline at all. Consider that the vertex shader is able to see the vertex ID (control point ID in this case) and instance ID. The hull and domain shaders can see the primitive ID (which is basically a patch ID). Using this information alone, very interesting and useful things can be accomplished: a good example is producing a large mesh consisting of many individual patches. The patches can be placed appropriately by using the primitive ID.

Earlier I touched on the tessellation stages having compile-time settings. These settings are specified with the hull program. Here is an example declaration of settings.

domain(x) - This attribute specifies which domain we're using for our patches. In this example, I specified a triangle domain, but it's also possible to specify a quadrilateral or isoline domain.

outputtopology(x) - This attribute tells the tessellator what kind of primitives we want to deal with after tessellation. In this case, triangle_cw means clockwise-wound triangles. Other possibilities are triangle_ccw and line.

outputcontrolpoints(x) - This attribute describes how many control points we will be outputting from the hull program. We can choose to output anywhere from 0 to 32 control points which are then fed into the domain shader.

patchconstantfunc(x) - This attribute specifies the name of the patch constant function, which is executed once per patch.

Each stage is given different data. To illustrate this, I will show one possible function signature for each stage.

Let's take a look at the topology produced by the tessellator by using the wireframe rasterization mode, a quadrilateral domain, and integer partitioning.


The edge factors are held constant at 1, 1, 1, 1 and the inside factors at 1, 1. The tessellator produces the following mesh: 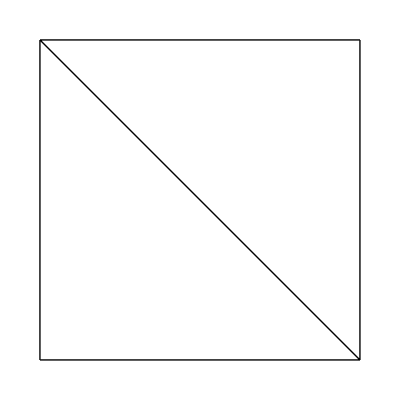 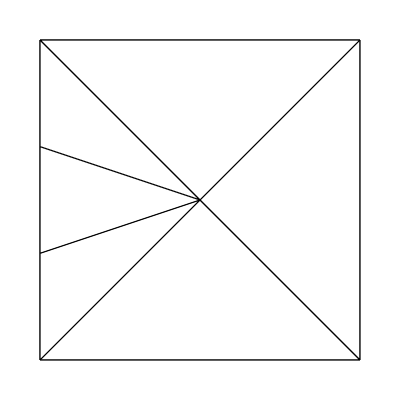 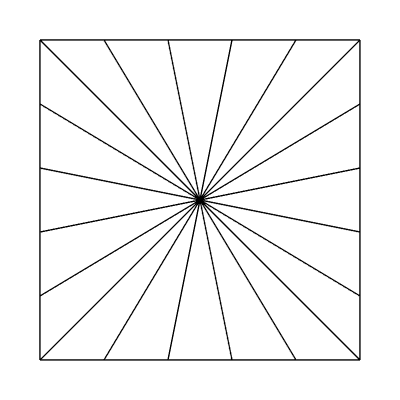 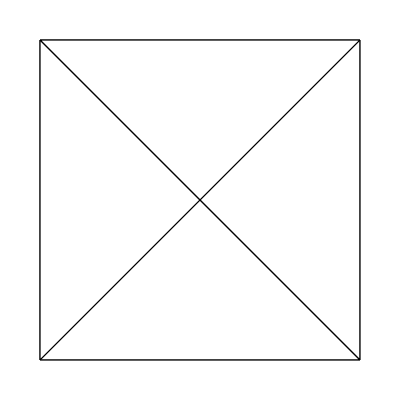 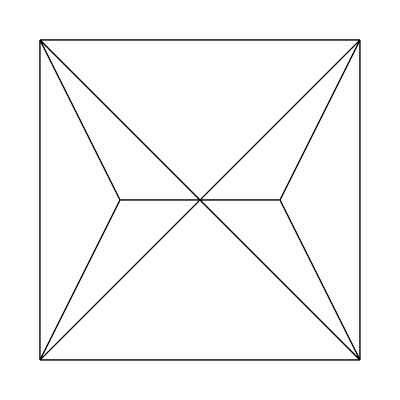 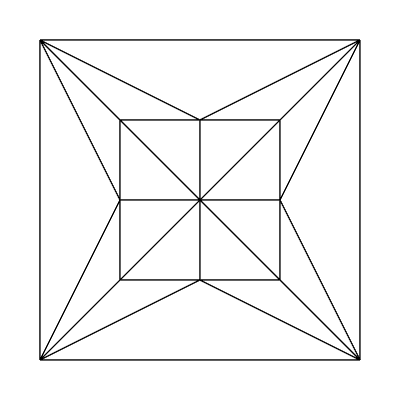 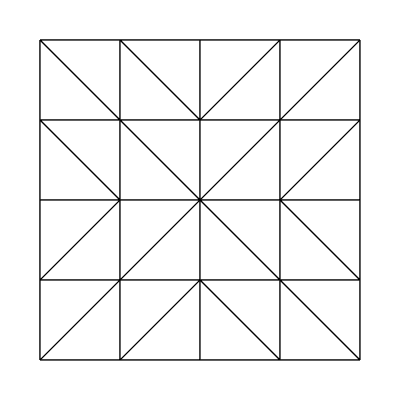 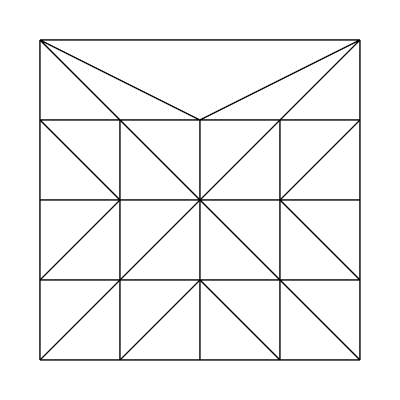 It should be noted that when using integer partitioning, the implementation is essentially using the ceiling of the written tessellation factors. Let's take a look at the output from the fractional_even partitioning scheme. 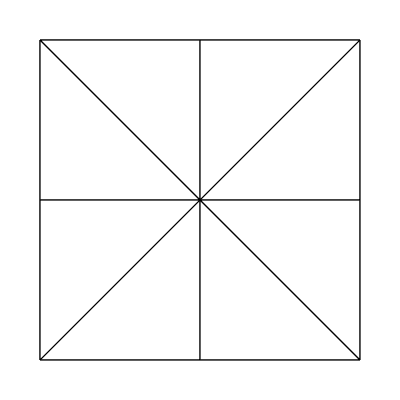 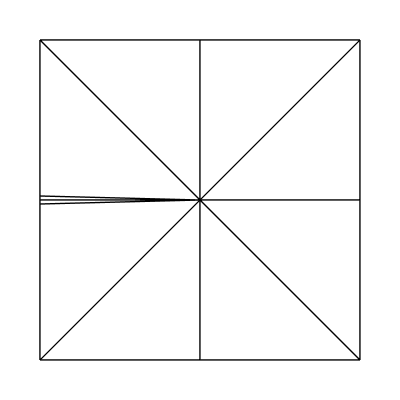 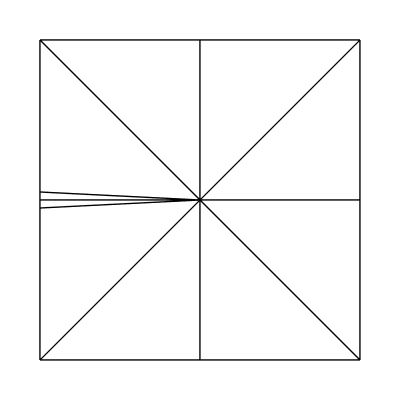 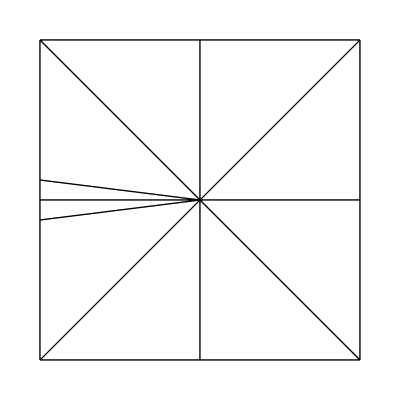 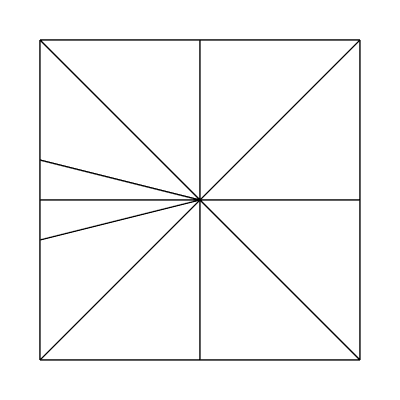 Here's a funky one with edge factors of 3, 3, 3, 3 and inside factors of 4, 6, using the fractional_odd partitioning scheme: 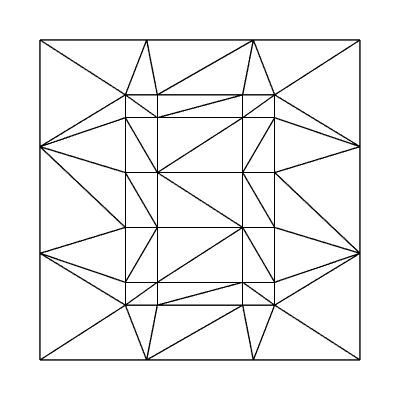 Ever wondered how many resources you can bind to a shader at one time? Or how many slices you can store in a 2D texture array? All of these limits can be found in the D3D header. For D3D11, this is D3D11.h. In this post, I'd like to point out notable improvements in D3D11.

Maximum number of interstage float4s: 32 between every stage, up from 16

Maximum number of unordered buffers that can be bound to a pixel or compute shader (D3D11_PS_CS_UAV_REGISTER_COUNT): 8, up from 0 ;)
Posted by Hexadecimal at 7:01 PM 1 comment:

This is just a quick update post on projects I am currently working on.

1. Adding support for the tessellator into my realtime parametric surface plotting program. The original version of this program simply rendered an equally distributed mesh and offset the vertices in the vertex shader. Now I am tessellating patches in realtime to determine how many triangles should be output.

The initial results are promising. Shown here are three images, each of the same plot but with a differing camera position. 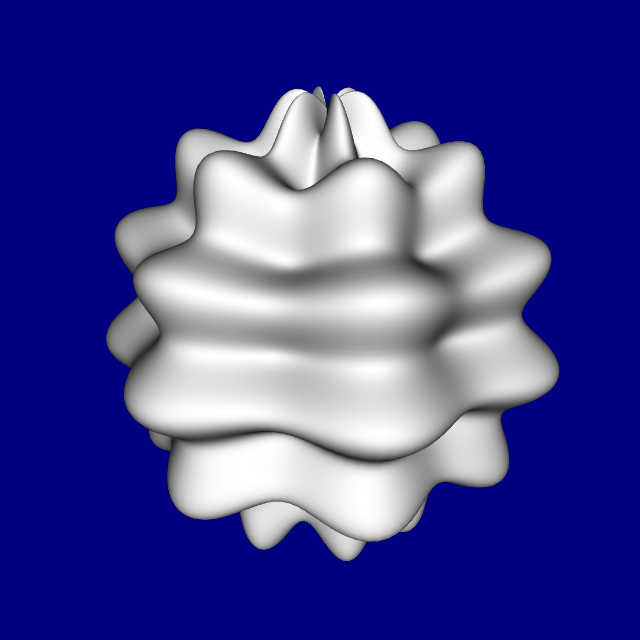 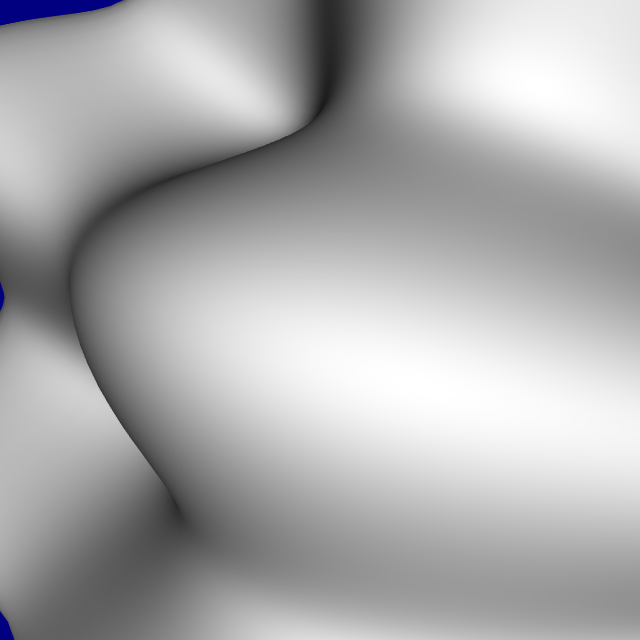 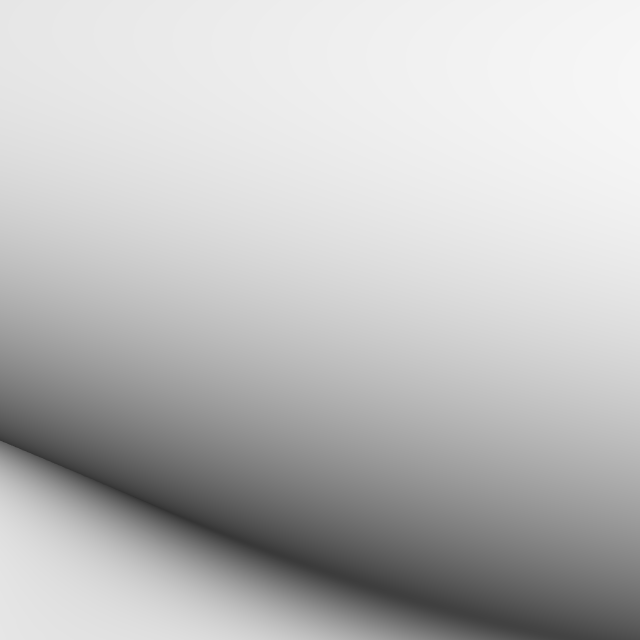 2. Music visualization program using wavelets. I plan on bringing the tessellator into this application once I go 3D. 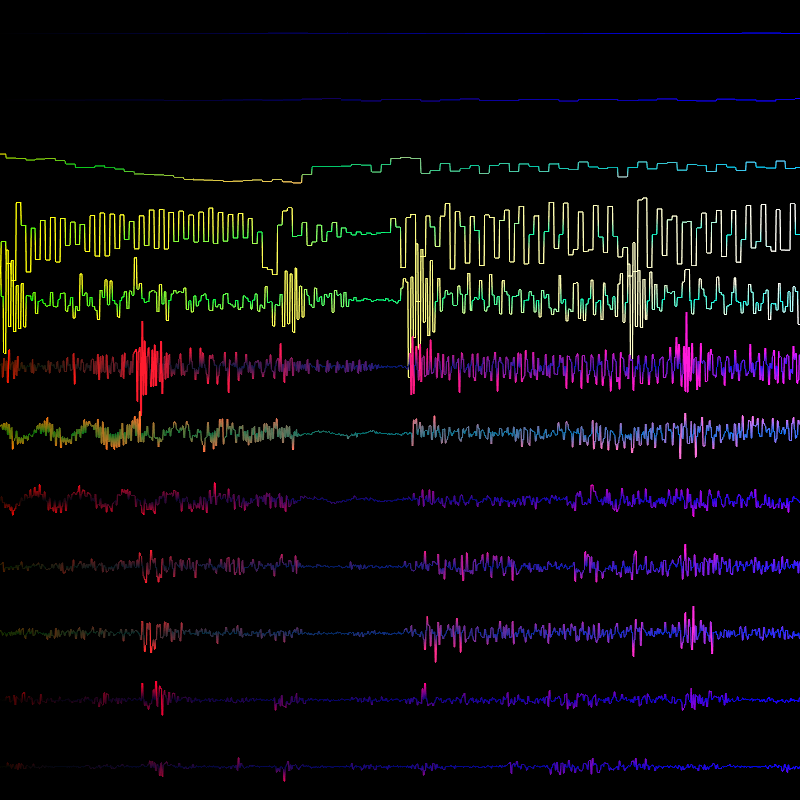 Posted by Hexadecimal at 9:40 PM No comments:

Beware integer division on the GPU.

In a certain compute shader I am working on, this code

runs much faster than using

Posted by Hexadecimal at 10:58 AM No comments: